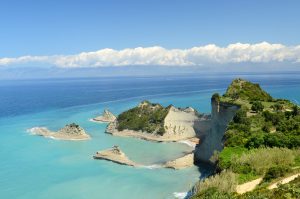 The island of Corfu has been home to a succession of rulers and cultures, each one adding to a lush mix that has evolved into the most beautiful and fascinating of the Greek islands. Corfu has attracted tourists from around the world since the 1940’s, and it is now one of the most popular destinations anywhere in the country.

With magnificent beaches on the eastern shoreline and soaring rocky crags, deep coves and small secluded beaches on the west, Corfu has all the ‘usual’ tourist appeal of any Mediterranean island, but it has a lot more to offer.  The mountainous interior is almost as unspoiled and verdant and it was when Homer wrote about it way back in the BC’s.

The old town of Corfu has taken on a very cosmopolitan flavour, but it has retained a wonderful mix of varying architecture that makes strolling the narrow streets a very rewarding experience.  There is plenty of evidence of Roman, Norman, British, French and Italian influence, but the heritage of the Venetians and later the British is most apparent.

You must visit the old fortress, most of it built by the Venetians to hold off invading Turks.  They dug a moat around it for additional protection, and the old drawbridge has been replaced by a 60-foot metal bridge, but the moat remains.  The fortress has been occupied continuously for 1500 years, and aside from its historical significance it’s also arguably the most beautiful place on the island.  You will find works of art dating back to antiquity, and the view from the walls is breathtaking.

Though tourism makes up a large percentage of the island’s economy, the mild climate and fertile soil contribute to a thriving agricultural sector.  For an enlightening (and tasty) education in this aspect, visit the Triklino Vineyard, about 7 kilometres out of Corfu town on the road to Pelekas.  You can sample wines made by the family that has carried on with traditional methods for 150 years and see the original horse-powered wine press.

Make sure to spend some time exploring the rest of the island.  You will find some great opportunities for mountain climbing or just wandering through peaceful wildflower meadows and olive groves, and visiting remote mountain villages in the heart of the scenic island.
Source: holidays-over-the-net.co.uk