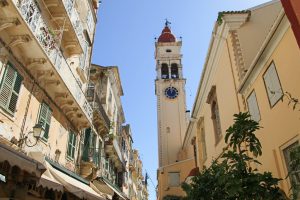 Every year, on 11 August, Corfu celebrates, with pomp and circumstance, over three days, an event that took place three centuries ago. This event was the victory of the locals and the Venetians against the Turks, on their last attack.

Taking into consideration that:

The Turks had attacked the island sevelar times before, in 1537, 1571 and 1573; those attacks resulted in the devastation of a large part of the island.
The Turks, some years before, had conquered ( 1669 ) Chandax, the last fortress of Crete , and Corfu has welcomed refugees of that war.
It isn’t hard to imagine the terror and the determination with which they confronted the attack. This was the best organized attack of the Turks against the Western world .

The position of Corfu wasn’t easy, despite the fact that the renowned German general Schulenbourg had arrived in Corfu, to undertake the organization of defense. .

In order to help the defense of Corfu, and of the straights to the entrance of the Adriatic Sea, the Austrian army make a diversionary attack in the territory of Hungary and in the end they defeat the Turks at Petervardein (5 August), beginning the liberation of Hungary .

On 11 August, the Turks, after bloody yet fruitless attacks, suddenly abandon the siege and leave leaving part of their supplies .

The desire to win, the fear of devastation, the unexpectedly easy victory and August , established in the soul of the Corfiots these celebrations , which they dedicated to the patron Saint of the town and the village. This miracle by their Saint , they continue to celebrate it to this day.

To honour count Schulenbourg , they created a statue while he was still living (which rarely happens ), which can still be seen at the entrance of the Old Fortress.
Source: corfuvisit.net