Corfu: Saint Spyridon the Keeper of the City 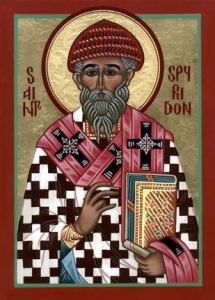 St. Spyridon is revered for the miracle of expelling the plague from the island, amongst many other miracles attributed to him. It is believed by the faithful that on its way from the island the plague scratched one of the fortification stones of the old citadel to indicate its fury at being expelled.

St. Spyridon is also attributed the role of saving the island at the second great siege of Corfu of 1716. Its legend ran that the sight of St. Spyridon approaching Turkish forces bearing a flaming torch in one hand and a cross in the other, had caused panic.

This miracle is one of the earliest successful examples of psychological operations in warfare (psyops). This victory over the Ottomans, therefore, was attributed not only to the leadership of Count Schulenburg who commanded the stubborn defence of the island against Turkish forces, but also to the miraculous intervention of St. Spyridon.

Venice honoured von der Schulenburg and the Corfiots for successfully defending the island. Recognizing St. Spyridon’s role in the defence of the island Venice legislated the establishment of the litany of St Spyridon on 11 August as a commemoration of the miraculous event, inaugurating a tradition that continues to this day.

In 1716 Antonio Vivaldi, on commission by the republic of Venice, composed the oratorio Juditha triumphans to commemorate this great event. Juditha triumphans was first performed in November 1716 in Venice by the orchestra and choir of the Ospedale della Pietà and is described as Vivaldi’s first great oratorio.

Hence Spyridon is a very populair first name for Greek males born on the island and/or to islanders.