Mykonos: Greek Island of the Winds 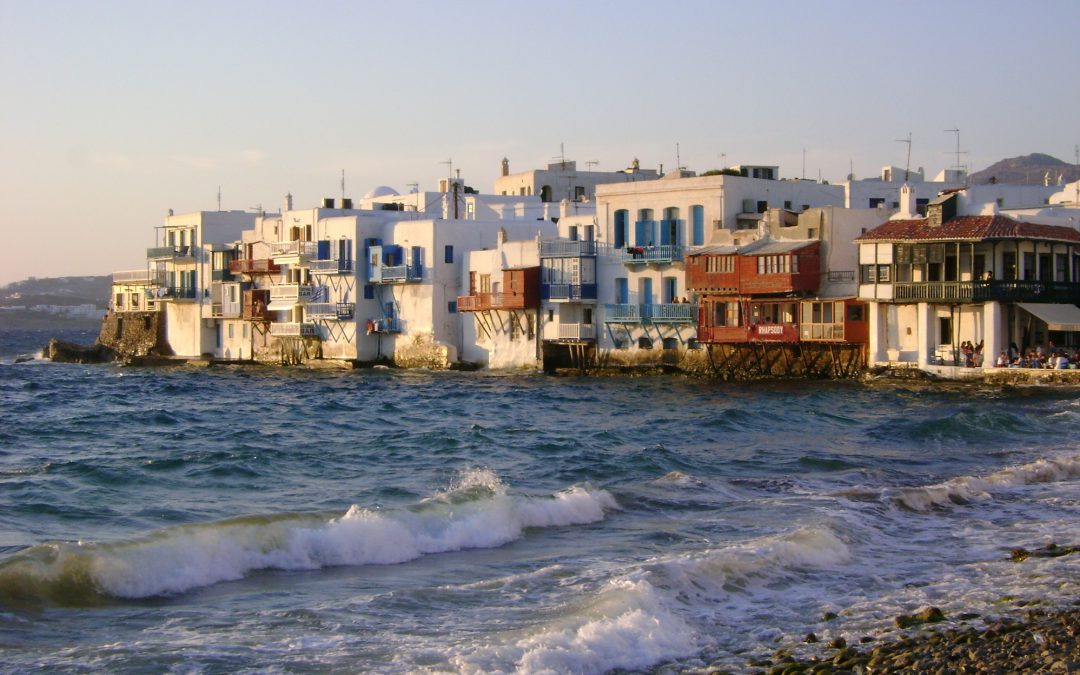 As one of the favorite Greek Island destinations, it’s hard to imagine a time when Mykonos, Greece was a humble little island without electricity. Things changed dramatically in the 1950s, with the arrival of noted celebrities like Aristotle and Jackie Kennedy Onassis, Maria Callas, Marlon Brando, Grace Kelly, and Elizabeth Taylor. Renowned as Greece’s party island, night or day, Mykonos hops with energy and excitement, yet still maintains the distinctive charm of an old world Mediterranean fishing village.

The smallest of the Cyclades Islands, this magnificent little island magnetically attracts travelers from far and near.  Its iconic seven thatched windmills standing imposingly on a hill with a luminous blue skied backdrop are the quintessential feature of Mykonos, often called the Island of the Winds. Built by the Venetians in the 16th century, these windmills, though no longer functional, are living testimony of the island’s use of innovation when it came to tapping the enormous power of the wind to grind grain. The windmills remain open to the public and one known as the Bonis Mill houses the three-floored Agricultural Museum, the first of its kind in Greece.

Arriving at the stunningly picturesque harbor of Chora, Mykonos’ capital by cruise ship, we are instantly beckoned and beguiled by its stacked, blue-roofed whitewashed sugar-cubed houses with wooden colored doors and staircases lined with potted geraniums.  Purple bougainvillea climbs over walls and hangs from balconies while oleander and hibiscus fill the air with their fragrant scent.  Mykonos is quite simply, unforgettably intoxicating in its simple and timeless beauty.

The absence of motorized traffic in the inner part of the city made the experience even better as we followed the narrow meandering pedestrian shopping streets and sinuous twisting alleyways of the harbor town. During the 16th and 17th century, pirating was common in these islands, so alleyways were built to fool the pirates and thwart invaders landing on these shores. It’s very easy to get lost in the confusing maze of labyrinthed corridors, even without imbibing in an alcoholic beverage or two, so it’s not hard to imagine it being quite impossible for the pillaging besotted pirates to successfully navigate. Shop-filled alleyways end abruptly into cul-de-sacs deliberately designed to enable the townspeople to ambush their ravaging invaders as they attempted to make their way back to the safety of the harbor with their plunder.

In sharp contrast to its lavish boutiques and suntanned vacationers dressed to the nines, a darkly dressed elderly woman bent with age passes by leading a donkey laden with vegetables through the town’s narrow streets. Her presence a stark reminder that the island is more than a playground for holiday visitors and cruise ship revelers. It is still home to ten thousand Greeks, many whose families go back generations before Mykonos became the stunning tourist destination it is today.

The western part of town meets the sea at Alefkántra or “Little Venice”, an elegant 18th century housing district perched precariously on the edge of the azure sea. It’s quite easy to fall in love with this charming quarter with its mystical magical appeal. Sea captains built their homes in this area for rapid loading and unloading of cargo from their vessels. Sunsets from the balconies of these homes are spectacular as are the breathtaking views of the Aegean Sea with gentle breezes blowing in from the sea.

Alefkántra is a favorite haunt of highly acclaimed artists who’ve made this charming neighborhood of Mykonos their home and many have portrayed the magnetic beauty of Little Venice in their priceless art, etchings and paintings.   Today, many of Alefkántra’ s sea captain homes host trendy bars and restaurants, with some of the best views on the island.

You can’t get closer to the water than having lunch at Kadena right on the harbor’s edge. The restaurant’s location is perfect for people watching- one of the favorite pastimes in Mykonos. We shared grilled halloumi, a semi-hard Greek cheese made from sheep and goats milk, prepared with lemon, garlic and dill. Our main entrée was the best Moussaka we have ever tasted-anywhere. The eggplant and ground lamb with a white sauce was superbly spiced and cooked to perfection.  Every bite was like eating a piece of “Greek foodie heaven.”

After lunch, we left the beaten path and rented motorbikes, an easy process with only a driver’s license, credit card and signature required at Hercules Car and Bike Rentals, an established company renting to tourists for over 30 years.

We ventured north to the more barren, rural, windswept, almost untouched part of the island. The mountainous landscape had a surreal, almost moonlike quality to it. Taking in endless spectacular views with the wind in our hair was definitely the way to see the island.  Forget the road map and the fact we can’t read half the Greek street signs, we were adventurous. After all, it’s quite impossible to get lost on an island that’s a mere 10 miles long and 7 miles wide.

We traveled to remote areas where small and hidden beaches are scattered along the rugged coast with views that seemed to go on forever. Lone whitewashed churches literally built in the middle of nowhere seemed to appear around every bend in the road. Not surprising, since there are more than 500 churches dotting the landscape of this tiny island.

A visit to Mykonos is easy to plan, since the sun shines 300 days a year here and rain falls mostly in February and March. Elia Beach, located only 6 miles from Mykonos town, is considered one of the most beautiful and pristine sandy beaches in Greece with clear crystalline turquoise waters. Less crowded than the beaches near Charo (Mykonos Town), a range of watersport rentals is available for those looking for parasailing, water skiing or windsurfing adventures. For sheer relaxation, we rented luxurious sunbeds and umbrellas for sunbathing. At no additional charge, we watched the ships appear over the horizon. One thing to note for first-time visitors to Greece, particularly those with children: Beaches permit topless bathing. And some of its 30 beaches allow total nudity.

Returning to Charo toward sunset, we were reminded of a quote from famous American writer, Henry Miller “It takes a lifetime for someone to discover Greece, but, it only takes an instant to fall in love with her.” And so it was with Mykonos. One thing is for certain. We’ll be back.