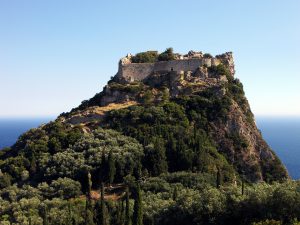 Long lazy days on the beach with the sun beating down out of a clear blue sky. That, for many people, is Corfu. But as I discovered there’s there’s another side to the island thanks to the opening of Corfu Trail. This way marked route which links the secret corners of the island enables more than just the adventurous few to head for the hills.

Long lazy days on the beach with the sun beating down out of a clear blue sky. That, for many people, is Corfu. But there’s another side to the island.

Above the tourist resorts are paths that wind their way through olive groves and across rocky hillsides covered in golden yellow Jerusalem sage, white and purple cistus and a plethora of orchids.

Scattered on the slopes, connected by tracks and narrow roads, lie ancient villages where lizards freeze motionless in the shadows, an old woman drives a donkey laden with firewood and children glance curiously at you as they play in the narrow alleys squeezing between the houses.

And then there are the tavernas. Here you can break your day’s walk into easy stages and relax with a Mythos beer or glass of wine and perhaps a plate of olives or tomatoes or roasted feta cheese, for walking in Corfu doesn’t have to be all hard work.

Until recently, only an adventurous few ventured away from the resorts then, in 2000, Hilary Paipeti devised the Corfu Trail, a waymarked route which links the secret corners of the island into a continuous walk.

But we had chosen a less energetic option that samples the highlights of the trail, spending a few days around three centres.

We started by going to the beach. No, not to soak up the sun, but to meander along the shoreline from Perivoli, where scarlet poppies danced in the breeze and wavelets lapped lazily on the pebbles.

We did take our swim suits though, for a promise had been made of lunch in a taverna on the shore with a swim afterwards, but the cold water was perhaps a little too refreshing as no one else followed me into the crystal clear sea.

Another day we climbed from our base at Benitses to Moni Pantokrator, a chapel set high on the cliffs. A festival was taking place and we were welcomed by friendly local people who pressed cakes and ouzo into our hands.

The hillside was crowded with cars and vans which crawled their way slowly up the tracks to disgorge the worshipers, yet the next day I went back to do the route again as a run and had the six mile route entirely to myself.

With an island that measures barely 40 miles long, transfer days don’t eat into the time.

Certainly none was wasted for, while our baggage was taken on by bus, we walked through flowery meadows and olive groves pierced by dark green cypress trees to Liapades and a hotel only a few yards above the beach.

Another transfer day had us following a high ridge flanked by yet more flowers and a profusion of butterflies.

Thunder rolled one evening at dinner time as we strolled up the road to a restaurant for dinner, but no rain fell and our return was highlighted by fireflies dancing in the darkness.

Another evening was enlivened by Greek dancers and, when invited to join in, how could I refuse when partnered by a charming young Greek lady and a little girl about five years old.

Our third hotel, in Nissaki, proved to be the grandest with a panoramic view of the sea. Albania looked almost close enough to touch, while above the hotel rose the tree clad slopes of Mt Pantokrator.

At 3000ft this is the highest point on Corfu and its ascent is best kept for a good day. Crossing the summit plateau we wandered through rocky outcrops, where a tortoise lumbered slowly out of our path, before a descent through cistus and broom emerged at the abandoned village of Ano Perithea.

Well, not quite abandoned, as there are three tavernas open in summer and people are starting to rebuild some of the houses. Trade was certainly brisk with a large Greek family at lunch.