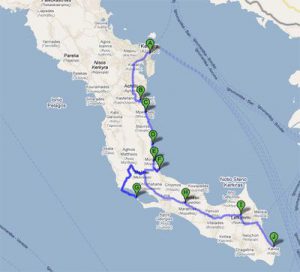 CORFU TOURS
Tours of the beautiful island of Corfu will have its main town as  starting point. The good road network makes the most important sites, and some of the most characteristic villages easily accessible, whether you choose to rent a car, or follow an organised tour, or get the local KTEL bus.

From the town we take a southwesterly route, passing through Kanali and continuing  towards Gastouri. This is a picturesque village 11.5 kms from the town, built at a short distance from the sea. A gully divides it into two attractive settlements with traditional houses, narrow streets and arches.

Two kilometres east of the village, on a small hill, is built the recently renovated Achilleion, the palace of the Austrian empress Elizabeth, or “Sissy”. The “melancholy empress”, as her biographers have called her, retreated to Corfu after the death of her son Rudolph. She was already familiar with the beauties of the island from previous trips when, in 1890, she decided to build the palace. She entrusted the plans to two renowned Italian architects from Naples, who presented her with the completed building in 1892. Influenced as she was by the Iliad, she gave the palace the name “Achilleion”, and resided there off and on until 1898, when she was assassinated in Geneva. In 1908 the palace was bought by the German emperor, Kaiser William II, who used it as his summer residence until 1914.

The gardens are adorned with various statues, of which the most important is the “Dying Achilles”, a work by the German sculptor Herter. Further down stands the eight-meter-high bronze statue of “Achilles Triumphant”, the work of the German sculptor Goetz, which is of a dubious artistic quality. There are also statues of Lord Byron, of the famous hetaera Phryne, and of the empress Elizabeth herself.
The Achilleion is a neoclassical building extremely ornate and impressive, which seems out of place in the natural environment. On the ground floor, in a series of rooms decorated in Pompeian style, are preserved personal items and mementoes which had belonged to Elizabeth and to the Kaiser, as well as various paintings, furniture etc. To the right of the entrance, there is a room decorated with wall paintings which served as a chapel. On the balcony with its Ionian peristyle, on the second floor, there are several pieces of sculpture, among them the busts of ancient Greek philosophers, of Shakespeare, statues of the nine Muses, of the Graces etc. The palace is set among beautiful gardens, with a wonderful view towards the Halikiopoulos lagoon, Kanoni, Pontikonissi, Perama, PantoKrator, and the mountains of Epirus opposite.