The Ionian Island of Corfu, a cultural melting pot 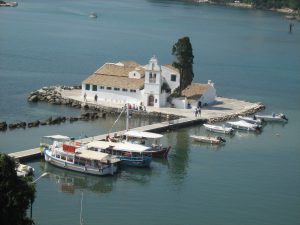 Visiting Corfu on a crewed yacht charter of the Ionian Islands is a visit to an island that is a cultural melting pot of strong Greek, Roman, Venetian, and British cultural and architectural influences.

One of the most northern of the Greek Ionian Islands, Corfu has an international airport, and therefore is a great island to begin or end a crewed yacht charter of the Ionian Island chain.  With strong ties to Greek and Roman mythology and history, and architecturally reflective of both the Venetian and British occupation of the island, Corfu is an exciting island to visit while cruising on a yacht charter in Greece.

Corfu is said to be named after the beautiful mythological water nymph, Korkyra, with whom Poseidon fell in love, captured and brought to Corfu where their child, Phaiax, was born.  There are still several ancient temple sites from Greek and Roman settlements on the island.   However, Corfu, sitting off of the northwest coast of the mainland of Greece was long controlled by the Venetians, and was the scene of a numerous battles, and sieges, reflected today in the number of castles that dot the island country side.  The British controlled Corfu until Corfu became a Greek Island.  Today Corfu is one of the few places in Greece, where cricket is still played.

Old Town Corfu, built by the Venetians on a peninsula separated from the rest of the island by a natural gully that was dug into a moat, is a labyrinth of streets behind fortified walls.  This is a colorful fun area to wander with narrow streets and little shops.  Behind the town is the Esplanade and Citadel with an arcade filled with little restaurants and bistros.

Nearby are the Neo Frourio (the new citadel) and Palaio Frourio (the old citadel), both also built by the Venetians and open for visitors to wander and explore.   Also nearby is the Palaia Anaktora and gardens, once home to the King of Greece and now filled with museums surrounded by the beautiful gardens.  And to the south of the city is the Achilleion,  built by the Empress of Austria in the late 1800’s as a neoclassic tribute to Achilles, and now open to visitors as a museum.

The countryside of Corfu is dotted with olive trees and wildflowers and around the coastline are beautiful beaches with crystal clear water.  Be sure to visit Paleokastrits Bay on the northwest side of Corfu overlooked by the 12th century monastery of Theotokos.  Take the ship’s tender into the many caves washed into the shoreline of this bay with beautiful blue water.

While there are certainly Greek and Roman remains on Corfu, the overwhelming architectural style and feel is Venetian and neo classic as left from the Venetian and British periods of occupation.  And surrounding all are the beautiful Greek waters with bays and anchorages to visit for a refreshing swim on your crewed yacht charter in the Greek Ionian Islands.