Tips on What To Do in Corfu 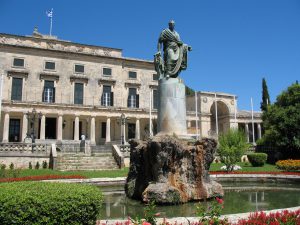 The island of Corfu provides peaceful sanctuary from Greece’s crowded mainland cities, such as Athens. Many weary travelers look to Corfu for a relaxing time sipping coffee while watching others stroll down the cobblestone streets of Old Corfu Town. However, this island is not without pastimes; whether you’re a history buff or an outdoorsy type, you’ll find plenty of ways to fill the days (and nights) on Corfu.

“The most heavily visited of the Ionian Islands, Corfu draws sun-worshippers and resort-hoppers (and is a good jumping-off location for more islands), but it also attracts history and architecture buffs.” — Concierge.com

“Probably no one needs to be told that one of the great pleasures of traveling about Greece is just occasionally to sit still — that is, to plunk yourself down on a cafe chair and enjoy a drink a while you observe the passing scene.” — Frommer’s

Sightseeing
If it’s history you’re into, you should plan on spending the majority of your time in Corfu Town. The cobblestone streets of the northern section of town (Old Town) are littered with historic sites, the most popular being the 10th century Old Fortress (Palaio Frourio) that overlooks the town from the east and offers visitors the chance to explore the island’s turbulent history up close. The Palaio Frourio is mirrored by the Neo Frourio, or New Fortress, in the west, which played an immense role during World War II as a shelter for island citizens.

Corfu Town is also an important Orthodox pilgrimage destination because it is home to the Church of Agios Spiridon. The church is located only a few blocks west of Corfu Town’s main square, the Spianada, and dates back to the 16th century. It’s the final resting place of the island’s patron saint, Ag. Spiridon.

If you find yourself facing a rainy day, Corfu Town is home to numerous top-notch museums. The Palace of Saint Michael and Saint George — sitting a few blocks from the Church of Agios Spiridon — was constructed during the British occupation of the island and now houses the Museum of Asian Art. Others recommend visiting the Byzantine and Archaeological museums located on the northeastern edge of town.

“Kérkyra Town’s Archeological Museum, just south round the coast, is the best in the archipelago. The most impressive exhibit is a massive (17m) gorgon pediment excavated from the Doric temple of Artemis at Paleópolis, just south of Kérkyra Town; this dominates an entire room, the gorgon flanked by panthers and mythical battle scenes.” — Rough Guides

Hiking and Parks
If you enjoy spending time outdoors, leave Corfu Town behind and head north to Mount Pantokrator, whose summit towers more than half a mile high above Corfu’s northeast coast, approximately 20 miles north of Corfu Town. Once at the top, prepare yourself for breathtaking views of both the island and the sea. If the climb to the top of Mount Pantokrator isn’t enough, challenge yourself to the Corfu Trail, which stretches about 120 miles from Cape Agía Ekateríní on the island’s north coast to the small southern hamlet of Sparterá.

“The opportunity to enjoy Corfu’s natural riches has now been laid on a plate for us. After years of painstaking preparation and not a little foot-slogging by the organizers, the Corfu Trail was officially opened in the summer of 2001. This 200km-long walking route meanders and zigzags through every one of the island’s varied ecological zones, from wild Cape Asprókavos in the south to the little-known beach of Áyios Spyrí­dhon in the far north.” — Rough Guides

Beaches
Whether you’re looking to snorkel, parasail, waterski or simply soak up the sun, most of Corfu’s coastal towns — particularly Glyfada to the east, Agios Stefanos to the north and Issos to the south — offer plenty of opportunities to enjoy the beach and the water. If you have a sense of adventure, don’t miss the chance to explore the numerous seaside caves in Paleokastritsa along the island’s northwest coast. Recent travelers suggest visiting the fishing village of Kassiopi in the north for those looking for a mellow resort town.

“Beaches! Yes, Corfu has dozens, but they’re a pebbly bunch. The best are Glyfada, a sceney favorite of wealthy Greeks; Sidari, which has rock formations such as the hyped Canal D’Amour (where the cliffs form a canyon in the sea that you can swim through — very romantic); and rocky Paleokastritsa, overlooked by a cliff-top monastery whose museum contains what monks claim is the skeleton of a sea monster.” — Concierge.com

Nightlife
Despite being known as a relaxing destination, there’s no denying that Corfu has a wild side. The streets of Corfu Town are speckled with lively bars. If your main reason for visiting Corfu is to party, experts recommend heading to Agios Gordios, Sidari, Kavos.
Source: travel.usnews.com