Top 6 reasons to get passionate about Corfu 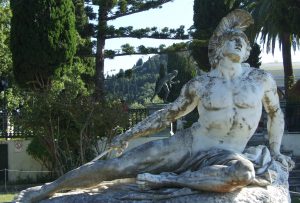 CORFU, GREECE–The young couple kiss and cuddle on the worn walls of the watery moat guarding the Old Fortress. Could their heated embrace be inspired by the Greek legends, ancient history, beautiful buildings, quaint squares, and graceful plaza of Corfu’s Venetian-inspired Old Town? Are they swept away by romantic views across the sapphire sun-kissed sea, separating this, “greenest of the Greek islands” from the nearby Greek and Albanian mainland? Have they been sipping the local liqueur, a bright-orange kumquat concoction believed to be an aphrodisiac? Or maybe they’re moved by the Mediterranean magic of the Corfu of Homer—the beguiling island where Odysseus was shipwrecked on his way home from Troy.

We were all teenagers once — and no matter where we’re from, we know exactly what’s on their minds! Hormones aside, there are all kinds of reasons to be passionate about Corfu.

1. Exploring Old Town is a stroll through history, the ageless mix of architectural styles is living proof that this northern-most Ionian island has been a prize for covetous conquerors through many centuries; Venetian bell-towers, tiny Greek Orthodox churches, gracious French-style shopping arcades, and British palaces. Unlike the gleaming white, blue trimmed, and pastel houses found on other Greek Islands, Corfu Town’s shady cobbled squares and narrow alleyways, decked in lines of laundry, would look more at home in Southern Italy. The red dome of The Church of St. Spyridon stands sentinel over Old Town, with literally thousands of Corfiot kids named Spyros in honour of the patron saint, whose mysteriously preserved remains and ornate casket are housed in the half-century year old church, and ceremoniously carried through the street on four holy days each year.

2. The Esplanade’s Liston Promenade and Spiannada Square is “the spot” to meet in Corfu (Kerkyra) Town. Crowded cafes line the wide pedestrian promenade, tables spill out of the elegant French and Venetian-style buildings, packed with people sipping thick Greek coffee, gossiping, and watching the world go by. Spiannada is one of the largest town squares in Europe, and the leafy Esplanade is filled with historic monuments, a Victorian bandstand, soccer-playing kids, white-clad cricketers, evening brass band concerts (apparently almost every child on the island can play a musical instrument), and straggling, early-morning partiers heading home from popular Liston cafes and bars, like Kafe Koklia, Arco, and Libro d’Oro.

3. The Old Fortress, (Palaio Frourio) is a Corfu landmark with amazing views from its towering headland, back over the town, and along the island’s east coast. Built initially during Byzantine times, Corfu’s entire population once lived within the walls of the Old Fortress, which is now a museum that features sound-and-light shows telling the fortress’s history.

4. Pontikonis is that postcard picture of Corfu. But, even if I squint and use my imagination, I can’t see how tiny “Mouse Island” got its nickname. The picturesque little island’s lonely Byzantine Monastery lies hidden amongst towering trees, just a short boat ride from the scenic convent of Vlacherna, perched precariously at the end of a causeway, and just a head-duck away from the end of the runway at Corfu airport. I got a great bird’s-eye view of both when I landed. According to legend, Pontikonis was formed when the ship that delivered Odysseus back to Ithaca, was turned to stone by an angry Poseidon. This Corfu landmark is definitely worth a visit, but it still doesn’t look like a mouse to me!

5. Achillion Palace is the Greek mythology inspired summer residence of Austrian Empress, Princess Sissy, named for the weak-healed hero Achilles, whose stone statue looms in the lush gardens of this royal retreat, set high in the hills above Corfu Town. Sissy’s sad, short life even reads like some Greek tragedy — a beautiful young woman married to a notoriously unfaithful husband, a meddlesome mother-in-law, a son’s suicide, and finally, in 1898, her assassination. James Bond fans touring the palace will recognize the casino setting from “For Your Eyes Only.”

6. Corfu countryside. You’ll need to rent a car (there are also scooters and motorcycle rentals but insist on a helmet even though the locals don’t wear one and are wild drivers!) to explore this second largest and greenest Ionian island. Flat in the south, craggy mountains loom over Corfu’s northern half, with steep, dramatic coastlines, and rolling peaceful countryside swathed in silvery green olive trees and stately cypresses. I’m told the road snaking up the slopes of Mt. Pantokrator, has some harrowing hair-pin turns, but the views from the top are worth the drive. Squeezing through the narrow, one-way street in the lofty village of Lakones, the rear-view mirror of our tour bus almost brushes the buildings. “I haven’t hit one yet,” boasts the bus driver. But, I’m not sure if he’s talking about the walls or the locals, who must take their lives in their hands stepping out their front doors each day.