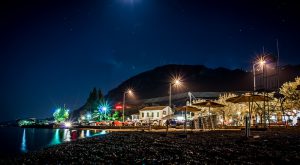 The quaint fishing village of Benitses is situated 12 kms south of the city of Corfu. Its name is mentioned for the first time in history in 1469. The water of the springs which flows from the mountains of Aghii Deka and Stavros, join together in two small rivers, giving the area the name Pinisse…

The quaint fishing village of Benitses is situated 12 kms south of the city of Corfu. Its name is mentioned for the first time in history in 1469. The water of the springs which flows from the mountains of Aghii Deka and Stavros, join together in two small rivers, giving the area the name Pinisse (derived from the ancient Greek word ‘Pinio’) = Pinitse = Benitses.. Recent archeologic excavations brought to the light ruins of Roman thermal baths in relatively good condition.

The main occupation of the locals is: fishing, cultivating lemon, orange and olive trees in large quantities due to the fact that there is ample water supply in the area and olive oil production. There were twenty two millstones powered by water, operating in the beggining of the 19th century, in the mountainous part of the village where not only the locals but farmers from as far as Corfu town, brought their olives to be crushed.

The mild climate and the natural beauty of Benitses village has attracted a lot of tourists from the beginning of the century. It is only during the last 20 years that tourism has replaced all other sources of income and now is the sole occupation of the inhabitants during the summer season.The population of the village which today stands at approximately 800, never exceeded 250 during the Venetian rule of the island. From the 1900´s till 1981 it varied from 416 to 800 locals.

It´s small distance from mainland Greece and geographic position contributed to the fact that many greeks from the mainland fled to Corfu to avoid the Othoman rule of their home town, in search of a better life in the Venetian ruled island of Corfu. Today a big number of locals in the village of Benitses has origins from the mainland and specifically from Souli. After the latters´ occupation from Ali Passa, in 1804 and 1821 many Souliotes (locals of Souli) settled on the eastern coastline south of Corfu. Benitsiotes (locals of Benitses) names like Bellos, Marjokas, Zikos and Nastoulis remind us of this immigration.Its importance as a seaside resort and a seaway to the the port of Corfu was not overcome by important events in history. The locals were easy pray for savage attacks but also for anyone who dared to disturb the already difficult life of an unprotected seaside village. Such attacks left Benitses in ruins during the Othoman sieges of the Corfu fortress in 1537, 1571 and 1716.In 1917 the Serbian army and ousted Serbian government settled in Corfu. Many soldiers and officers stayed in Benitses, as at the San Stefano area was where the temporary hospital was set up.

After the Ionian islands joined Greece in 1864, Benitses was part of the Municipallity of Chrisideon with Gastouri being the center. In 1869 it joined the municipality of Messohoriton, with Kastelanous Messis being the center. The latter municipality was revived during the occupation by the Italian army and until the end of World War 2. From 1912 and until 1928 it was part of the Gastouri community and after that it became and independent community. From October 1998 it belongs to the Municipallity of Achilleion.

Benitses, geographically situated in the middle of the island of Corfu and facing mainland Greece, is positioned between sea and mountain and very close to the